The Shadow is the term used to describe aspects of the self (the psyche) that are disowned, usually as a blood-family survival mechanism, because they were deemed inappropriate back then in childhood. So, I could disown my happiness as I figure that I get more attention from my parents when I’m upset or sad. This works ok but in adult life it often has disastrous consequences.

If I disown my happiness, it doesn’t thus go away. It’s made unconscious (I’ve disowned it) and thus I project it onto other people or things, and I can see overtly happy people everywhere. I may be overly attracted to happy people but really what I’m seeing is my own happiness, projected onto others. Or I could disown my anger and then I would see angry people everywhere and live in fear. Everyone is angry but me…!

It’s possible to disown any of the thousands of possible human characteristics or traits, both negative or positive. With each disownment comes a loss of a potential. This can be re-owned and regained though.

I first became interested in Shadow work when I first came into the writings of Ken Wilber in 2009. A friend mentioned him to me in relation to helping to unwind the neuroses associated with depression and anxiety-based symptoms, especially symptoms that existed in relation to other people. So I Googled “Ken Wilber the Shadow” and I found this very revealing blog series on understanding The Shadow. 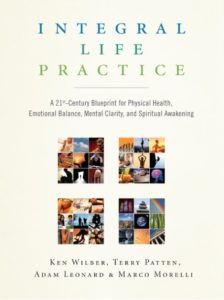 Helped by meditation, I’ve developed a certain degree of self awareness, and I identified very much with the strong symptomatic repulsion / attraction dynamic of the series mentioned above, and went on to read Wilber’s excellent No Boundary and learned so much more about the path of awakening through learning about Wilber’s take on the “Spectrum of Consciousness”. All this stuff is taken from his work in the 70’s so is quite old, but it was in the noughties that the less theoretical and more practical 3-2-1 Shadow Process was devised by him and publicised in his more recent co-authored book Integral Life Practice

3) Face it
Penny flows like water. She lives by just having fun and doesn’t get caught up in minor details. She is very attractive and like a goddess. She has abundant energy, seems to spend most of her time dancing and laughing and chatting to friends. She has seemingly infinite capacity to relate and make friends with everyone she meets. She seems to like everyone by default and has a predominantly positive, optimistic outlook.

She is always involved in things and has a lot of energy and get-up-and-go. She is intelligent, educate, learned and wise. She is strong, omnipotent almost. Her reason for being is love and to have fun.
She is good with language and a great communicator. She likes socialising and has many friends, and is at ease being a social butterfly.

She has a well-developed male side, which I think may be a cover for a wounded little girl. When she communicates to me, sometimes I go on the defensive, in a state of disbelief that she could like me, thinking that she’s too good for me, perfect even.
She has an extroverted, outward manner, which I sometimes think is somewhat false and a cover or compensation for some other part of her that she wants to deny. She’s a great athlete. She’s very esoteric and alternative, with hidden depths. A truly unique individual and a valuable friend.

2) Talk to it
Neil: Why do you want to be my friend? Why do you like me?
Penny: I want to be your friend because you’re sincere, charming, intriguing, interesting and good fun. You’ve got great depth and we share a lot of common interests and values. You’re also smart and resourceful, you are different to your average guy, there’s more to you than average, you’re able to do things that most people know nothing about. You’re also open, honest and generous, not to mention very handsome. I even like your pain in a way as it shows your vulnerability and human-ness.

We’re quite a good energetic match also – your emergent, transcendent nature is similar to mine. You’ve got quite a lot of very attractive qualities that a woman like me finds appealing; sincerity, intelligence, strength, adventurous, earning capacity/provider – you’ll make a great father.

Penny: I’m open to connecting with you, and bringing down all my defences, but you have to drop your defences and allow me in – this is a two way process! If you put up a defence and are anxious and awkward around me, it’s very hard for me to be myself. I can sense that you don’t feel safe around me to be yourself, so it doesn’t feel safe for me to be myself around you – I can only relate to whoever is in front of me!

I’m very loving and accepting of you whatever way you are, not only that I’m also patient and forgiving. I understand that you can be in pain and going through difficult periods, but I also see that you may be better left alone whilst going through those periods. Stop worrying about whether I like or accept you – I already do! Just be yourself, drop your defences and let’s have some fun together.

Neil: Why do you like and get on better with Tom and Greg than with me?

Penny: Because they just treat me as a friend, and an equal. They open up to me and trust me, and I do likewise. They’re not concerned with whether I like or accept them and they trust that they can be themselves around me, be playful and have fun. Likewise I feel that same safety and comfort around them, and so I will with you.

Neil: How are you so strong and amazing, nothing seems to faze you?

Penny: I’m not! I’m strong in some areas but weak and vulnerable also. I have my own pain and wounds to deal with. I have a very soft inner core, warm and feminine, but carry wounds of abandonment, just like you do.
If you drop your defences and open up to me I will reciprocate and you’ll see that I’m just like you, trying to navigate through life, succeeding sometimes and failing others. When we open up to each other you’ll see that I’m so much like you and everybody else that you’ll wonder why you ever thought that I was stronger or smarter or different.

I’ve dropped any shyness that I had and I’m a bit more outwardly exuberant than you as I sought to be not shy like my mother, plus I’m an only child so I had to be more outward in order to meet people and make friends. I get hurt and cry and release and work through those hurts, plus I’ve gotten really hurt by rejection in relationships also.

Neil: Why do you react negatively towards me sometimes?

Penny: Because your stuff is activating my stuff – your fear my fear, you’re anger my anger! You’re activating my old wounds, my own disowned stuff, my disowned fear, anger and sadness. When you have that expression, it brings up my stuff, but that’s ok, I’m aware that it’s my stuff, that’s my responsibility, and I still like and accept you and want to be friends with you.

Neil: I am very attractive and like a god. That abundant energy that I see in her is actually my own that I’ve disowned. I have infinite capacity to relate and make friends with everyone I meet. That’s my own potential/energy that’s just ready for prime-time. I like everyone and am very loving and compassionate, by default, also ready for primetime, as well as being predominantly positive and optimistic in my outlook. I am always involved in things and have a lot of energy and get-up-and-go.

I am intelligent, educated, learned and wise – sometimes thinking that I am much more so than others (and then feeling inferior an defensive when I meet someone who I think is more so). I am strong, omnipotent almost. I am good with language and a great communicator (I wish to always continue to develop this more).

I like socialising and am (want to be) at ease being a social butterfly. I have a mature and fast-developing female side. When I am in the presence of certain others, they may feel intimidated because of my intensity and my radiance. They may feel disbelief that I could like them. I have some of and want to develop more and outward, extroverted manner which is genuine, even if I am faking it somewhat at the start. What harm?

I am very creative, admiring and jealous sometimes of others who are creative in ways that I am not, especially those involved in the arts and theatre.

I want to learn to be more creative, through unlearning that which I have learned, and through letting go of all notion of self-image, thoughts of what others think or say of me, rules, expectations, and self-dialogue which contains injunctions (“I should”, “I have to”, “I must”, “I better”).

She’s a great athlete and I am/was and would also love to be fit again. I am very esoteric and alternative, with hidden depths. I am aware and have a big heart. She is so much more aware, in touch with reality and truth than your average person – again me!!

She lives by having fun and doesn’t get caught up in minor details – again a principle that I am implementing in my life, and something I wish to develop further.

A truly unique individual and a valuable friend – again me.

Verdict: very revealing, healing and worth the effort.