Mermaids have intrigued the minds of man for millennia. These seductive maidens of the sea were at one time portrayed as creatures to be fearful of. Seeing one was not necessarily a good omen. The idea and the symbolism of mermaids must be rooted deep in our psyche for us to continue to be drawn to them, as they act as a symbol, oftentimes warnings, that we can make sense of through knowing the spiritual meaning of mermaids.

The Origin Of The Spiritual Meaning Of Mermaids

A mythical figure, a mermaid is half fish and half woman. Many things are interesting about the mermaid, but particularly that mermaids aren’t found in just one culture’s folklore, they span from Europe throughout Africa to Asia.

The mermaid has the upper torso of a woman and the bottom half of a fishtail. In her early forms, the mermaid was seen as a creature who seduced man then killed him. Their meaning was far from a positive one. Early mermaids were also associated with disasters at sea – shipwrecks, storms, floods, and drownings.

Other cultures, however, assigned good qualities to the mermaid. They were often thought of as benevolent and that encountering one was a gift. To some, they were seen as protectors, a good omen for those at sea, which can be unforgiving, even deadly.

How mermaids made their way into the minds of the westerner is uncertain. One likely theory is that mermaids came from the siren, a figure in ancient Greek myth. Sirens were similar to the mermaid, only in that they are half human half animal. Instead of a fish, a siren mixes woman with a bird. They may have taken on the form of a fish once Christianity became popular in Europe.

Similar in appearance, the persona of the siren was the same as the mermaid. Sirens were known to draw men in with their beautiful song only to have them become attached and then to ultimately kill them.

Much like mermaids, sirens were also found at sea and are most closely associated with sailors. Their assimilation in western culture to a mermaid can be seen in language. For example, mermaid in French is “sirene” and it’s also similar in other European tounges.

The earliest known depiction of the mermaid is seen in ancient Mesopotamia, as far back as 1000 BC, when mermaids appeared in Assyrian artwork and literature.

These sea-beings may have only been viewed as mythical to ancient cultures. But there have been serious reports of their sightings going as far back as Christopher Columbus who claims to have seen one in the Carribean in 1493.

What Columbus likely saw was a manatee, a sea mammal native to the Carribean and parts of Africa. Having been unfamiliar with the manatee, Columbus was likely confused and a mermaid was his only source of reference for what he saw.

Mermaids continue being the focal point of our stories, even today. And no story is as memorable as Disney’s “The Little Mermaid”. And hopefully, you haven’t forgotten about the classic 1984 Tom Hanks film “Splash” either.

The Sea Of Life

The mermaid’s spiritual meaning serves as a reminder for us to “let go and jump in”. She sings her enchanting and capturing songs so that we may hear them and take the leap. This can be a scary thing for us to do since the sea is mysterious and unknown. And as we all know, the waters aren’t always so calm.

The sea of emotion can be messy and turbulent. The mermaid symbol lets us know that it’s OK, that we have nothing to fear, but we must jump in. This is why the mermaid shows up as a guide to take us through life’s inner and outer journey.

Most of all, the spiritual meaning of mermaids just want us to learn to let go and go with the flow.

Like all of us, the mermaid is of dual nature. Sometime’s seen as a great protector, other times as a seductress and a killer of men. The mermaid is also two species – human and fish. Mermaid symbolism reminds us that there are two sides to every coin and duality is present with us everywhere and always.

Mermaids have been seen as both a curse and a gift. For some, the mermaid was known to bring water to areas affected by drought. Conversely, the mermaid could cause floods, shipwrecks, storms, and other disasters at sea.

In this light, the mermaid could be seen as both benevolent and evil.

In Greece, mermaids are said to be the descendants of Aphrodite and Venus. These are the ancient goddesses of love and beauty. The type of beauty that mermaids are associated with is typically positive and celebrated.

On the other hand, her symbolism could be viewed as vanity. Mermaids are often depicted laying on the beach gazing into a mirror and admiring themselves while brushing their hair. This adaptation of mermaid symbolism came later on through the Christian church who used mermaid imagery to scare men away from sin.

One thing is certain, the mermaid is always portrayed as beautiful. She is pretty with long flowing hair and curves. Her song and looks are capturing, no matter how you view the mermaid.

Somewhere along the line, the mermaid got a bad wrap. This only worsened through Christianity and then even more so during the Victorian era, when the mermaid was portrayed as evil, as something to be fearful of.

The maiden of the sea went from being a good omen to being seen as untrustworthy. She was now a temptress and seducer who lead her victims to their untimely death.

The mermaid had suddenly become responsible for mother nature’s doings – storms, floods, and shipwrecks. Myth has it that the mermaid lures sailors in with her beautiful song only to lead them to their ship going down and passengers drowning.

The mermaid spirit animal can help you go with the flow, like the sea’s current that she swims with. This can save you a lot of pain and beating yourself up on life’s rocky shores.

The only thing the mermaid asks from you is that you are true to yourself and to be honest about your intentions. The mermaid will not guide you otherwise. 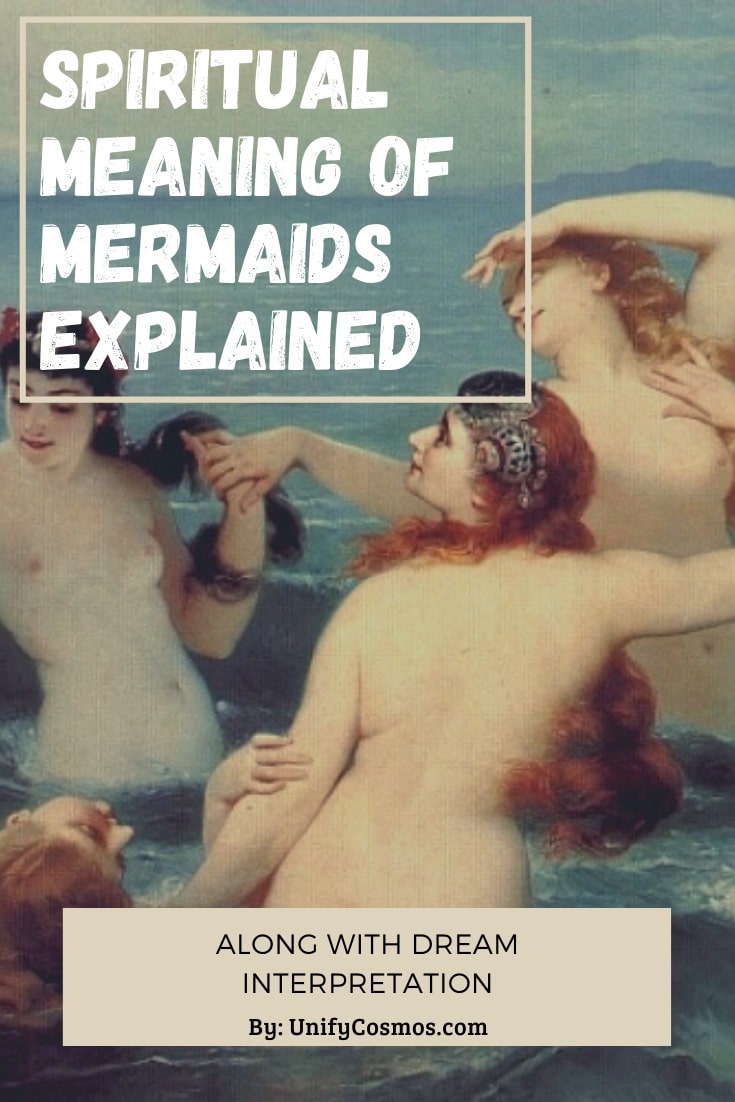 The Spiritual Meaning Of Mermaids In Dreams

Mermaids in dreams can mean many things. To find out what it means to you, make sure you take into consideration your experience, intuition, and particulars about the dream. For instance, it’s important to remember what the mermaid was doing in the dream.

Generally, mermaids in dreams are associated with illusion and deception, especially in the case with negative temptation that carries consequences. A mermaid in a dream can be seen as a heads-up for you.

Another general dream meaning is that a mermaid can be warning you that you are too trusting of someone that isn’t good for you or who is trying to take advantage of you.

In this case, the mermaid arrives in your dreamscape to remind you to learn from these mistakes so that you don’t get hurt unnecessarily once again.

Mermaids in dreams are like the mermaids of mythology. They represent sexual attraction. If a man is dreaming about a mermaid it could symbolize his attraction to a woman with bad motives for him.

Another general meaning for mermaids in dreams represents blocked and repressed emotions that can turn into an addiction. This addiction is typically associated with a person who isn’t good for you.

Conversely, if a woman dreams about a mermaid it could be a representation of her self. It could mean that she is thinking about luring in a man to do something that he doesn’t want to do – a relationship, marriage, or possibly a pregnancy.

It’s important to examine your mermaid dream from a level of intuition to know its spiritual meaning. For instance, if the dream made you feel happy or positive then it has different connotations than what is written above. If this is the case then your mermaid dream could represent happiness, love, and success in your near future.

Below we’ll take a look at some of the more common mermaid dream scenarios.

Seeing a mermaid in your dreams

Seeing a mermaid in your dream could represent your secrets, something you’re hiding or repressing. This dream is associated with things that you are keeping from but you know you should be forthright with. This dream could also indicate having issues with the feminine, commitment, or intimacy.

Being a mermaid in your dreams

If you are a mermaid throughout your entire dream then it’s a subconscious warning. You are a mermaid because it’s a heads-up about how you’re behaving. This particular dream is associated with vain, manipulative, or untrustworthy behavior that you are displaying.

Turning into a mermaid in your dreams

If you turned into a mermaid in your dream it could indicate feelings of wishing to be more attractive.

A mermaid luring you into the water in your dreams

The spiritual meaning of mermaids, or a mermaid, luring you into the water in your dream it could represent discovering your sexuality. It can also mean that you are dealing with feelings of not being attractive enough.

Brushing a mermaids hair in your dreams

This dream means that you fear a responsibility or an obligation that you have.

Seeing a friendly mermaid in your dreams

Seeing an evil mermaid in your dreams

If the mermaid in your dream was not very nice, however, this could mean there is unfaithfulness in your life. A likely scenario is that your partner is not being faithful to you.

Kissing a mermaid in your dreams

If you kiss or become physical with the mermaid in your dream this is a warning for you that the person you are attracted to has bad intentions for you.

Seeing someone you know as a mermaid in your dreams

If someone you know is featured in your dream as a mermaid it indicates your secret desires. It’s important to take more about your individual dream and life situation into account to find the exact meaning of the desires.

Hearing a mermaid’s song in your dreams

A mermaids song in your dream represents desires of the negative kind. These desires are typically uncontrollable to you and have destructive consequences. This dream serves as a warning.

Seeing a singing mermaid in your dreams

This is another warning dream. If the mermaid in your dream is singing then it indicates that there are problems in the future. It’s usually tied to other people and them convincing you to do something that you don’t want to do.

Seeing a mermaid dancing in your dreams

If the mermaid in your dream in seen dancing then this a good sign. This dream represents happiness and good fortune in the future.

Mermaid symbolism is beneficial to those looking to dive into the well of inner-life. The spiritual meaning of mermaids can help you to let go, go with the flow, and overcome addictions and wounds of intimacy. Happy diving.