Judith is a powerful Biblical name that’s been closely tied to the Christian and Jewish faiths throughout history. Portrayed as a heroine in scripture, it’s a name that signifies courage and wealth. She is the wife of Esau and the name Judith has strong numerology aspects, making the spiritual meaning of Judith powerful as those named Judith may already know.

Judith is best known as the woman who single-handedly saved the Jewish people from an Assyrian conquest lead by a beheaded commander.

Judith is a Biblical feminine name derived from the ancient Hebrew name “Yehudit”, meaning “woman of Judea”, “the praised one”, or simply “praised”.

The name’s ancient Hebrew etymology is broken down as “yada” = “to praise”, and “hod” = “worthy of praise”. Judith is the feminine of Judah. The meaning could also point to “Jewish woman” or “woman from the tribe of Judah”.

Judith appears is the Bible’s Genesis as the daughter of Beeri the Hittite and the wife of Esau. Elsewhere in the Old Testament, she is known by “Aholibamah”.

Most prolifically, she is the heroine in the Book of Judith (Apocrypha). Portrayed as a wealthy and courageous woman, she saved Jerusalem from an outside assault by the Assyrians conducted by Holofernes. She is known as the woman who saved the Jewish people by beheading Holofernes in his sleep.

Also in Apocrypha, Judith was used to describe “beauty”. In another instance, Judith symbolized “courage and chastity”.

Characteristics of the Name Judith

The name Judith is associated with creativity. This is quality that can be expressed through a career in helping others, solving large scale problems, or through the arts. The name also points to humanitarian efforts. The name Judith is more heart-based than intellectual. This makes you understand things easily on an intuitive level and also makes you quite emotional.

This is OK. Since it means that you are probably more in touch with your feelings than others. And emotional intelligence lacks in this world.

The highly humanitarian name of Judith would suggest that you are able to greatly touch and impact others in this lifetime. Justice and truth are important to you. Finding yourself working for civil rights is possible with the name Judith. You are a woman of her principals.

The name Judith also points to business endeavors. This mixed with your humanitarian side can be a powerful tool for the greater good if you can find a way. Above all, you enjoy helping people.

Because of your intuitive and emotional nature, you’re able to put yourself in the shoes of others and have a keen understanding of them. People would describe you best as “inspirational”. 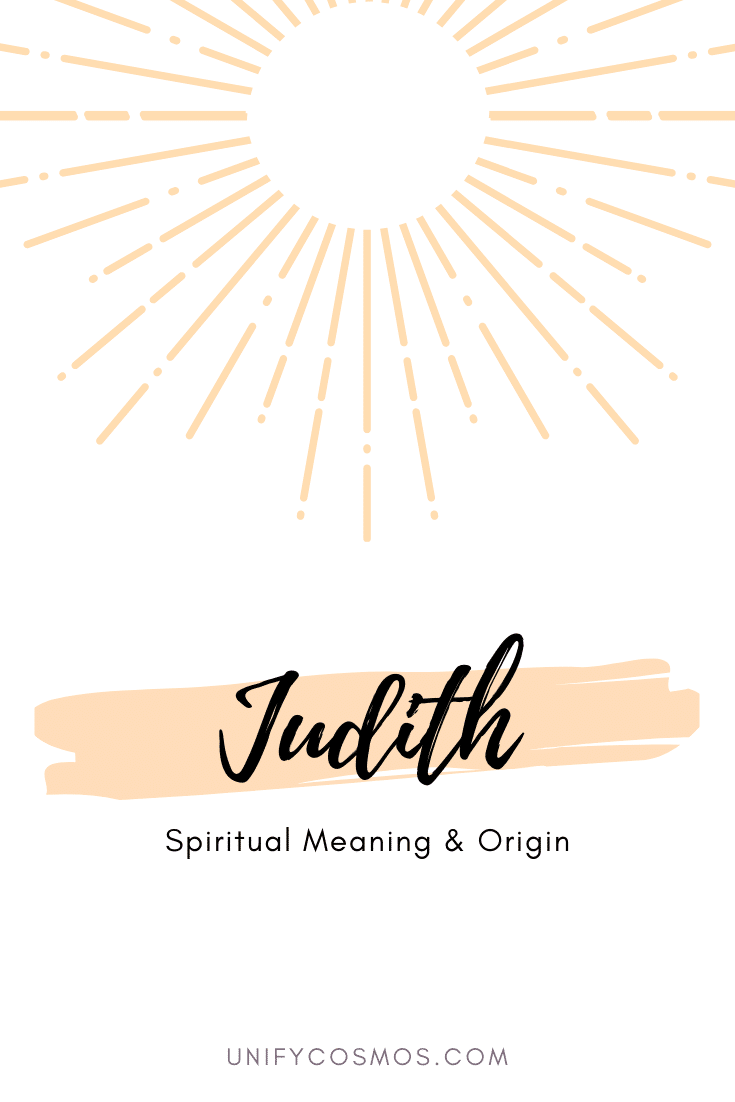 Judith has an expression number 9

Judith will have a charismatic personality that attracts others because of her number 9 expression. It’s a number of passion. Judith is extremely intuitive and romantic. She falls in love too easily and also gets hurt quite easily.

Simply because she cares deeply for others and her heart knows no bounds. Number 9 expression is the humanitarian number. This states that Judith will due best in work that’s designed to help others.

Judith has a soul urge number of 3

This is a highly creative and expressive number. It’s the number of artists and performance artists. For Judith’s to express themselves in the most healthy way possible, she will need an outlet that can offer this. Judith’s are best when they are singing, acting, performing, or actively creating in other ways.

Judith has been a top 50 most common given girl’s name in the United States since the 1940s and again in the 1960s. However, during that time its popularity has fallen. While still a relatively common name, it’s fallen in the ranks to being the 850th most common name in 2018.

Despite this, you can not deny the spiritual meaning of Judith and its powerful impact on Biblical stories and religious tradition.