From the Benjamin of Christian Biblical tales to the famed statesman Benjamin Franklin, many great men have sported this ancient Hebrew name throughout the ages. And if your name is Benjamin, this includes you as well. Let’s take a look at the spiritual meaning of Benjamin and its origins.

Origins of the Spiritual Name Benjamin

Benjamin of the Old Testament was the 12th and last son of Jacob and Rachel, who died consequently as a result of giving birth to Benjamin. It is said that with Rachel’s last breath she named the child “Benoni”, or “son of my pain”, which was later changed to “Benjamin” by his father, Jacob.

In Hebrew, “Ben” (or “Bin) translates to son, while “yamin” means “right hand” or “right side”. Yamin is sometimes also used as a way to describe other body parts on the right side.

In Hebrew, the name Benjamin has positive connotations. The second half of the name “yamin” means “right side” and sometimes “south”. Both right and south in the Hebrew language have a positive meaning, as opposed to “north” or “left” which carries negative meaning.

Benjamin isn’t only known for killing his mother during birth, the name is considered to be strong and highly positive. “On the right” also means “son of strength”. Later in the Bible, the name Benjamin is associated with a tribe, the Tribe of Benjamin. Small but famous, the tribe which made up with one other consists of “The Jewish Nation”.

The Tribe of Benjamin were a warrior tribe that dealt with a lot of conflicts, both internally and externally, and they were famous for their highly skilled archers of the time. The first king of the Jews, Saul, was a member of the tribe. 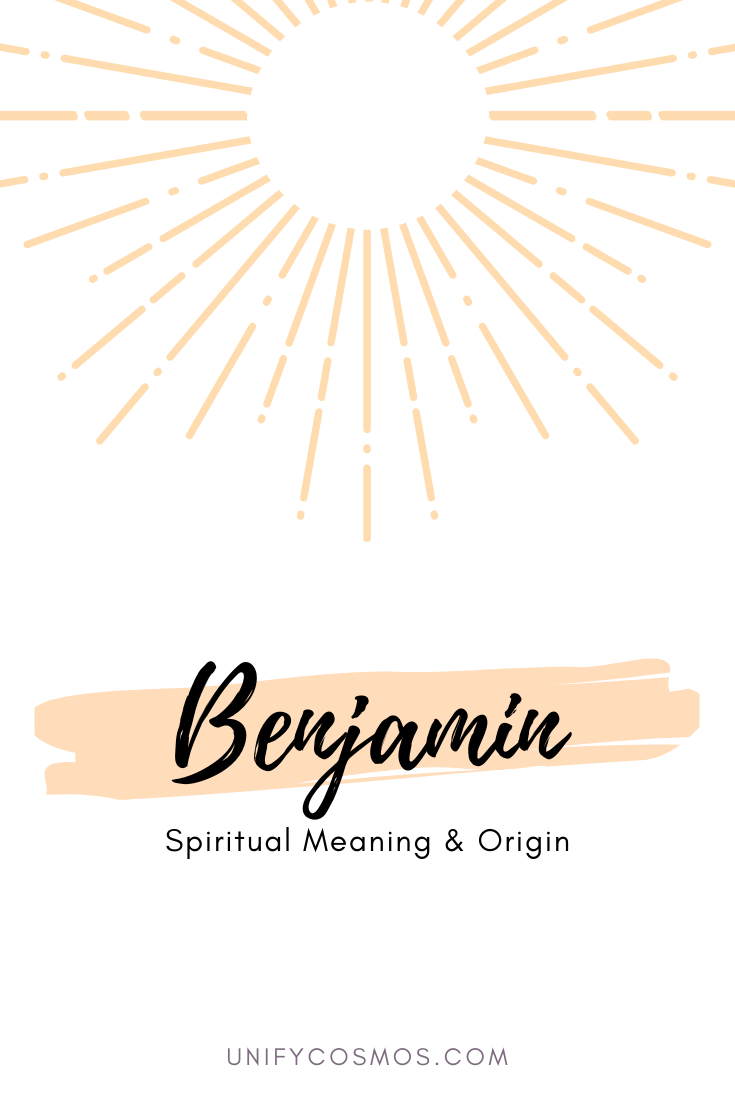 Numerology of the Name Benjamin

The Destiny number of the name Benjamin is 5. This means that you are an energetic creature, a healthy and highly activate individual. You may have a short temper, but it’s hard to stay mad at you for long because of your big heart.

When we add all of those numbers up we get 32. To further break Benjamin down numerically we would then add 3 with 2 which gives us 5.

This means that you are highly ambitious and goal-oriented. You tend to be narrowed in on your dreams and how to execute them, with preciseness. Benjamin’s mind is sharp, analytical, creative, and refused to budge. While all of these characteristics are positive and get you to where you need to go they sometimes can be expressed negatively and harm others.

It should be said Benjamin, that tolerance and patience are not your virtue. You seem to have the end in your mind and don’t have much understanding of people who may see it another way. Because your go-get-’em attitude is sometimes like a steamroller, it’s important to keep your aggressiveness in check, which can sometimes serve against you.

But your stubborn nature is not-for-naught. This makes you successful and extremely independent. A leader, if of only yourself. Leading others is certainly a possibility for you, Benjamin, if you can exercise patience and tolerance of others who may not be as quick or as sharp as you are. Your temperament may also lend a hand in worrying unnecessarily.

Benjamin also loves to travel and meet new people, but close relationships were never your thing. You value your freedom and expressing yourself to the fullest, even if at the expense of others. Chances are you do not work for a boss, rather are self-employed, a small business owner, or entrepreneur. This is because whenever you’re not able to express yourself fully – creatively or otherwise – or when you feel like you are being controlled in some fashion, this is when the aggressive side tends to come out the most.

Another way we can view the spiritual meaning of the name Benjamin is through a break down of each of the letters of the name.

The name Benjamin continues to be strong and spiritual. It’s a highly popular name and is ranked among the top 100 names for boys, only moving up in the ranks with each year. In the United States, Benjamin is ranked as the 14th most popular boy’s name. It’s most commonly found in the variation of “Ben”.

With playing such a vital role in Judaism and Christianities history, the spiritual meaning of the name Benjamin certainly makes it a name that will live on for many years to come.