Chanting the Brihaspati mantra will vocalize and help manifest the power of the lord of Jupiter. Among the Navagraha (Nine celestial bodies in Hinduism) Lord Brihaspati is often depicted wearing Pitambara, a yellow garb. This is the reason why wearing yellow clothes is said to bring good vibes from Jupiter.

I’m so proud of these puja guides, so I couldn’t be more excited to share them with you today!

As you may know by now, I like to write long and helpful posts for my readers. Sometimes, however, I get an idea to do something more, something even more useful.

That’s why I decided to prepare something that people could have in hand while reciting mantras. Something printable, easy to read, and that could act as a puja guide.

That’s how these guides were born.

Each guide has a big picture of a divinity that you need to devote to, a mantra, and a how-to guide to help you prepare yourself for reciting. It’s in A4 format, and all you need to do is to print it.

These chanting guides are completely free; all you need to do is to enter your email in the box below to unlock it.

Just click on one or all of the links below and the free PDF file will download immediately!

What is Brihaspati Mantra?

The Brihaspati mantra is a mystical chant for bringing clarity and positivity into your life. The chant is supposed to be a prayer to the supreme deity of Jupiter, lord Brihaspati. It is believed in Indian astrology that Jupiter has a lot of influence among the celestial bodies.

Lord Brihaspati is the preceptor of the gods. So, he is revered even by the gods. I believe it is due to his being a teacher or a guru to the gods that he has influence and it makes sense, as a guru, the other gods would also seek clarity with him.

Jupiter in Indian astrology is the ruler of the two constellations sign that we know as Pisces and Sagittarius. Jupiter is an indicator of fortune, luck, wealth, devotion, fame, wisdom, spirituality, religion compassion, and morality. Indian astrology helps figure out the influence of various factors in life, e.g. wealth, health, love, etc.

Who is Lord Brihaspati?

Brhaspati is also written as Brihaspati also referred to as Gurudeva. Gurudeva is a title given to the teacher of the gods. In ancient India when a guru becomes a mentor for a pupil, it was more significant than say a relationship between the modern teacher-student.

A student often lived with the guru’s family. A student would serve and learn from the guru. I would describe this as a cross between a boarding school situation and an apprenticeship.
My point is that their relationship was much deeper so the reverence the gods have for their guru is also believed to be deep. 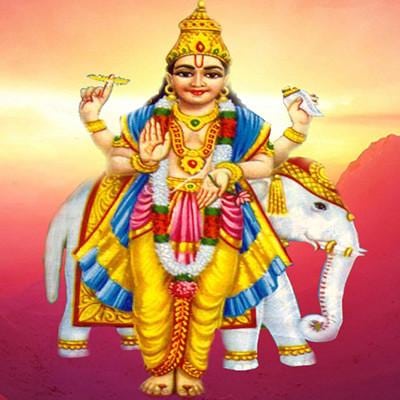 Several ancient and notable Hindu texts mention the god Brihaspati. In the Rigveda, he is a sage who was born from the first light, great and bright.

He drove away from the darkness with his brightness and purity. The hymns praise Lord Brihaspati as a knowledgeable and revered god. He also carries a bow with string made of Rta or cosmic order.

The god Brihaspati is also known as the deity of Jupiter. Jupiter in Indian astrology is the first celestial body, and hence, it is auspicious. It ushers in a period of new and good beginnings.

With the mantra, prayers offered to the guru of the gods, bring auspicious and positive changes.

Often, this is chanted on a Thursday which is considered Jupiter’s day and locally is known as Brihaspativara. A fast is also observed on Thursdays by devotees to increase his good influence in their lives.

How to Chant Brihaspati mantra?

Knowing the meaning of the chant will also help empower your chant as you speak it into the world.

The four Brihaspati mantras are known as:

I will elaborate enough on each mantra for you to understand the essentials and basic meaning of each chant.

A seed in many cultures and religion including the Hindu religion is considered a sacred symbol. A seed has unlimited potential and is something that sparks life and beginnings.

This chant is used to start prayers. The chant calls on the name of the Deity of Jupiter, the lord Brihaspati in order to honor the Gurudeva and bring the auspicious nature and vibrations of Jupiter.

Most Hindus only chant Beej mantras because beej mantras are for everything including prayers to celestial bodies like planets, gods and goddesses.

The Brihaspati dev mantra is basically a chant for removing the bad effects from your kundli or horoscope. It helps remove the negative effects of planets and stars that are positioned to bring bad influence in your life.

By chanting the Brihaspati dev mantra, you invoke the name and power of the god Brihaspati who is also known for his aspect of bringing divine justice as he is also a champion of all that is good and respectable.

As a preceptor of the gods, devotion to the Gurudeva will bring you the power to invoke his name so that his energy is manifested and brings to fruition the efforts in your endeavors. With the god appeased, the obvious result would be his blessings upon one’s life.

You have to chant it 108 times in order to reap a substantial benefit. The chant will connect your situation and life to the power of Jupiter so you may have its manifested power in your life bringing you clarity and positive energy to negate all the negative influences of your fate.

The Hindu bring a different approach to the saying “your fate is in your hands.” They give you solutions that may bring the correction in the factors in your life that bring in the bad influences.

The Goddesses hold significance because the feminine aspect of the divine is often viewed as passionate, soft and flowing. Appeasing the consorts of the gods who themselves in their own rights hold power would logically be a good idea.

I also understand that appealing to their motherly side would bring into fruition, the results of your efforts much faster and with better outcomes.

Brihaspati Gayatri Mantra in English
This mantra when translated means “Praises from me to the gods as I meditate and focus on the most respected, venerable one amongst the gods. May the teacher illuminate my intellect so I can have clarity for my path.”

This mantra speaks of the god Brihaspati as the deity god of Jupiter and the first amongst the cosmos. He is the Spiritual master of the devas or demigods and sages or pandits. His skin complexion is like gold, and he is full of intelligence. He controls the three worlds.

The Brihaspati Navagraha mantra must be recited and chanted with a certain level of devotion. If chanted without a certain gravity it wouldn’t bear much fruit. Without devotion, the chant is deprived of its power because the praises will be shallow and without much meaning.

Without devotion and faith, there will be no growth or results.

The Brihaspati Navagraha in English
This mantra when translated to English means I bow in servitude and in respect to Brihaspati, The lord god of planet Jupiter.

Here are a few tips when doing the pooja

As you progress with your devotion and become an expert in chanting the Brihaspati mantra, you will see love wealth and happiness show up on your doorstep.

You will also progress in leaps and bounds in all walks of your life. Offering your prayers and devotion to the lord of the nine cosmic celestial bodies will bring much success and positivity to your life.

As you invoke his positive energies, you will surely see manifested results in all areas of your life.