In a world with a sea of names, the ones with great spiritual meaning can be mistakenly overlooked by the less aware. Though this usually isn’t the case with the name Jacob, as it’s quickly recognized by most as being a top Biblical name, the book where the spiritual meaning of Jacob first took its roots.

It’s easy to go about thinking of a name as merely something you call somebody by and not having much else to it. For some, we wear our names on our chests with great honor, taking pride in their respective origins and their meanings.

Origin of the Name Jacob

Jacob is translated from the ancient Hebrew form of “Ya’aqov”. The name James is derived from the same translation. While Jacob remains a firm traditional name in the Jewish tradition, it’s counterpart James is more likely to be given to those of the Christian faith. This isn’t always the case, of course. Outside of English, many languages don’t even have a separation between Jacob and James, and they become the same name.

The name Jacob is solidly Biblical, there’s no mistaking it. Nowadays it is generally associated with the Jewish faith, where it had risen in its popularity during the Middle Ages. But the name Jacob isn’t resigned to one particular faith at all. Jacob is seen spanning across religion and time in both its same and variant forms.

Jacob, in its etymology is translated to “follow”, “heel”, or “supplant”. In the Old Testament, Jacob is seen in Genesis holding onto his older twin brothers Esau’s heel as they both exit the womb. Later on, in Genesis, Jacob supplanted his brother by buying his birthright, as per God’s prophecy.

A possible reason that Jacob was given his name was that his parents, Isaac and Rebekah, knew of God’s prophecy for Jacob to take his brother’s place. Some scholars believe that this is the reason while others put forth that it’s related to the way that Hebrew parents at the time would name their children based on an event or feeling that took place at the time of the birth.

Spiritual Meaning of the Name Jacob

The origin may sound slightly negative, but I can assure you that Jacob’s ability to “overcome” is seen as a positive aspect later on in the Old Testament (in Hosea). Also notable is that in Genisis, Jacob battles the angel “YHWH” and becomes arch-father Isreal.

Jacob is the name of many great people in the New Testament as well.

Other variations of the Hellenized forms of the Hebrew Name Jacob are recognized Biblically, 42 times throughout the New Testament. Jacob refers to two of the disciples of Jesus and a full-brother of Jesus known by James the Just. 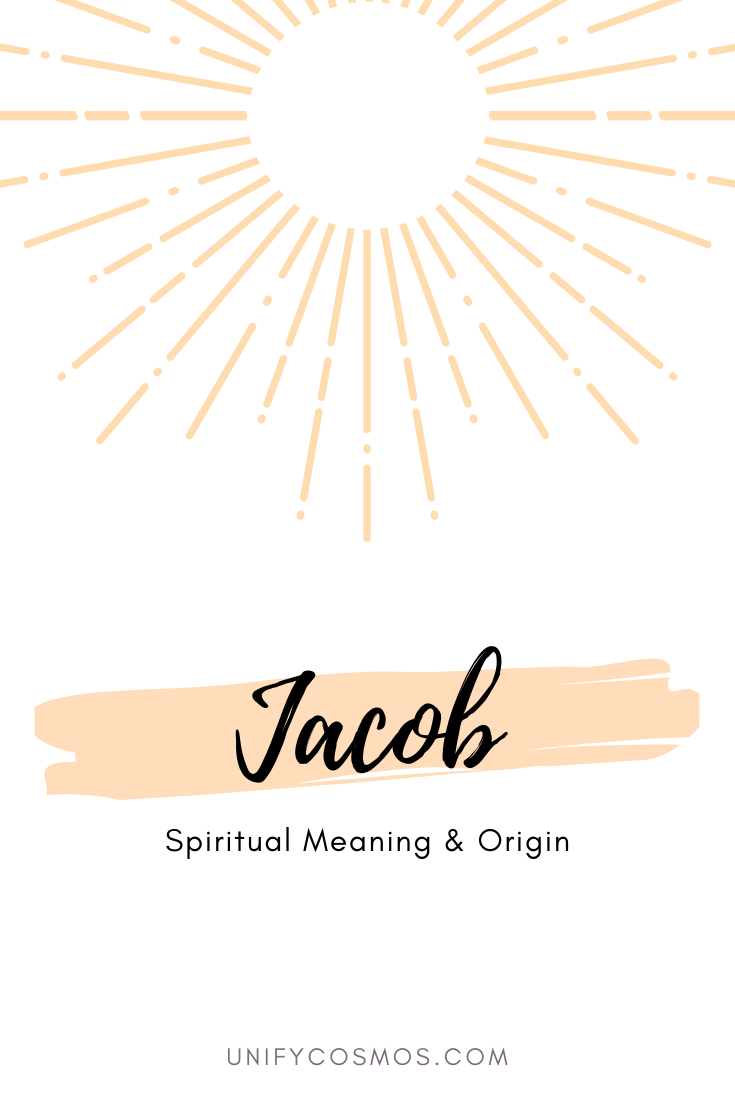 The Name Jacob in Numerology

The name Jacob contains 5 letters that total 13. Since 1 plus 3 equals 4, Jacob is ruled by the number 4. Jacob’s are very detail-oriented people. Naturally, they prefer systems and structure but also enjoy the untamed wildness of the outdoors. Nature is important to you because it brings you peace and renewal in such a hectic world where the systems that you so admire can become quite messy at times.

But being outdoors Jacob’s must be careful since you tend to fall victim to health issues, or at the very least worry about health a great deal. Some of the health problems that may face Jacob are related to the heart, lung, and intestines.

Jacob, while you tend to be sweet and calm inside you can take life pretty serious at times which is something that your peers can pick up on. It may benefit you to let down some of the walls, some of the structures, and embraces the spontaneity of life and all it has to offer. This task may seem difficult, though not impossible since those with the name Jacob tend to be quiet and reserved.

This is not meant to come down hard on you Jacob’s, since you are overall kind and friendly people, at times even appearing affectionate and playful. Jacob’s are very calm and collective, they are rarely if ever seen losing their cool. You are conservative by your very nature, smart, and may even be geared towards the arts. To top it off, you will always be financially successful thanks to your intellectual characteristics.

Also, due to Jacob’s systematic, oftentimes technical approach to the intellect – you may find yourself in careers that deal with technology, anything from working on computers to engineering.

Romantically you can be quiet sensual. You are loyal as a partner and very cautious about who you give your heart to. This is a great gift for whoever is lucky enough to land you, while other would-be suitors who don’t know you very well may see you as cold and not interested.

You are by no means unfriendly, people see you as kind for the most part. But Jacob’s prefer to keep their social circle small and usually socialize with those in similar professions or even keep the relationships business-oriented all together. You may even find it difficult to make small talk or find it pointless and bothersome all together.

Jacob isn’t strictly resigned to being a Biblical name of the past. The name Jacob continues to be popular and the most popular name among baby boys being born from 1999-2012 in the United States. The name Jacob remains popular in Arab and Muslim parts of the world. This is because Jacob is recognized in the Islamic tradition as a prophet of the Quran. The Arabic form of Jacob is “Yakub”.

Other Variants of the Name Jacob