The name has it’s powerful roots in Greek mythology and folklore, Melissa was the supernatural woman who was the caretaker of Zeus. Reflected similarly in Numerology, the spiritual meaning of the name Melissa is one of a lover, nurturer, diplomat, truth holder, and caretaker – a person that’s loved and adored greatly by those who know her and beyond.

Chances are that you know a Melissa or two. It’s a relatively popular girl’s name across the globe, but there’s so much more to the name Melissa than what meets the eye.

Melissa is of ancient Greek origin, a name which means “bee” (or “honey bee”) – the completely misunderstood, but loved by most, honey baring and flower pollinating insect. Melissa is a name found within Greek Mythology based on two important characters: the nymph who took care of Zeus as an infant and the fairy from “Orlando Furioso” who aided Rogero in his escape from the witch.

In ancient Greek mythology, Melissa was born to a Cretan king named Melisseus. Melissa was a nymph, which in Greek mythology is a supernatural being. According to folklore, Melissa discovered the use of honey and taught it to the bees, which is where the meaning of the name Melissa comes from.

Melissa was also the caretaker of a baby Zeus. Instead of milk, Melissa nurtured Zeus with honey, directing the bees to deliver it straight to the young Zeus’s mouth. Because of his upbringing with Melissa, Zeus’s hunger for honey continued well into his adulthood, even having cravings for it once he came to rule Mount Olympus.

Melissa is also a representation of the ancient Greek goddess Artemis, the goddess of the moon, in her form of taking away the pain of women during childbirth.

Melissa is seen as stable, mature, responsible, and caring. Your confidence is beaming and others may look upon you like a rock to lean on. This is also because people trust you, it’s just in your nature. But also you are charming and a great conversationalist. You are the perfect friend or family to stop and throw on a pot of coffee with, sharing in life’s joys and hardships – reflecting on victories and loses.

You are down to earth, reasonable, and practical. Nobody knows a better person to console in.

If you haven’t caught on yet, you have naturally strong parental instincts. This makes Melissa the perfect mate as well as a mother or caretaker. The downside of this is that you may show a possessive or over-protective attitude at times, but this is only because you love the people you’re trying to protect deeply. This may also make you more prone to worrying.

Melissa is also charitable and giving. Your compassion and love for others truly know no ends. Many people may come to you for advice, and while you tend to enjoy being the wise and loving person that people can trust to seek out, it may have you at times feeling burnt out. This is why it’s crucial to take excellent care of yourself and set strong boundaries with others.

Some health issues that you are prone to are directly correlated to excessive worrying. These problems include heart issues and high blood pressure. 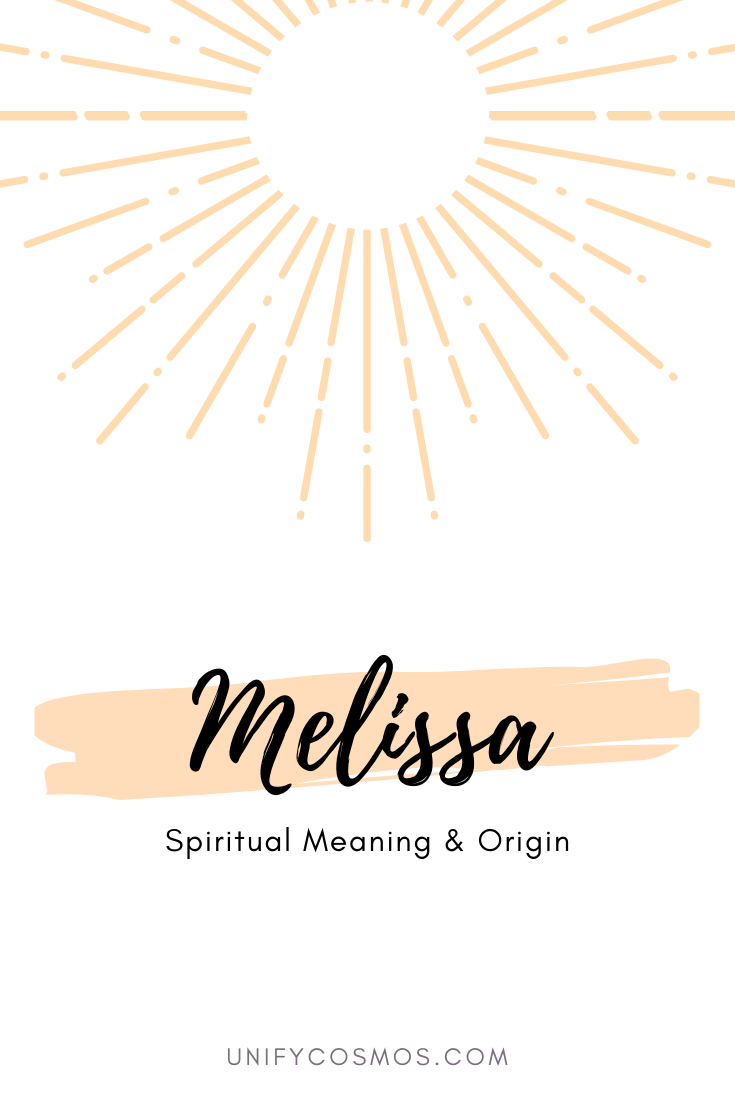 Numerology of the Name Melissa

The name Melissa has a soul urge number of 6. This is the number of balance, justice, and order. 6 is the number associated with karma. It may not come as a big surprise to you, Melissa – since you probably do it naturally already – but it’s your mission in this lifetime to uphold truth and justice.

You are adored and loved by many, especially those who are close to you. It’s almost impossible not to love you. You are likely to be extremely active in your community and known by many around town. Matters concerning the family and the household are of great importance to you as well, always playing an active role in your loved one’s activities.

The name Melissa has an expression number of 6. The expression number of 6 is loving, compassionate, selfless, humble yet charismatic, and responsibility. You are caring, nurturing, and stable. This is a good number to have but has it’s downsides as well, like increasing the chances of being taken advantage of. Some people with lesser hearts than yours may mistake your kindness for weakness. You may also need to feel useful to be happy and express your selfless nature in the service of others. This plays out in your job, community, at home, with your family, and with your friends.

You have a destiny number of 6. This makes Melissa a highly diplomatic person. You can get along with and close deals with just about anybody. This is thanks to your ability to put yourself in the shoes of others. You care about people and want the best for them and yourself in any given situation. People are drawn to you for these reasons and because of your charm and ability to lighten any situation. You are stable and have a firm grounding that others pick up on.

You have the personality number of 9. This number represents the completion of a cycle. It indicates a need to be of service of others. It is the most loving of personality numbers, but its downside is that it’s the number that feels hurt and suffering the most. This is due to the number 6’s big heart and deep emotional life.

While Melissa wasn’t an English given name until the 18th century, the name rose to popularity and remains that way (with a slow decline) across the United States, other English speaking nations, and all over Europe as well. In the United States, the name Melissa is ranked as the 43rd most popular girl’s name, where 1,180,065 people are estimated to go by the name.