You are here: Home / Spiritual Meaning of Names / List of 50+ Names That Mean Strong Spirit [With Origins]

Throughout life, we can become identified with our name. We take on their energies, we may even look a bit like them – “he looks like a Bob”, or “she looks like a Mary”. Some are said to be drawn to specific lines of work based on their names. A name can make or break you.

But we all know just how tough it is to break a “strong spirit”.

The following are boys’ names that represent strong spirit from across cultures – from Greece to Spain, England, Japan, Africa, the Middle East, and beyond.

Abir is a boy’s name of Hebrew origin that could mean strong spirit. More specifically, the name Abir translates to “strong, mighty, courageous”. In the Middle East, the name can be seen as Abeer.

Aimilios is a unisex name of Greek origin that means “strength”. The name Aimilios was popular for some time in the Greek Isles. It’s derived from the Latin “aeumulus”, meaning “rival”.

Amzi is a Hebrew name which means “strong”. The name Amzi is Biblical with several references in scripture. The name comes out of the Hebrew verb “ames”, which means “to be strong”.

Anders is an extremelly popular Scandinavian name, the 4th most popular. The name means “strong and manly” and is a variant of the name Andrew.

Both Andrew and Andreas are name’s of Greek origin that mean “strong and manly”. They are popular names in English speaking countries as well, especially in their shortened forms of Andy and Drew.

You might know Angus as a type of beef, but it’s also a first name of Gaelic origins that simply means “strength”.

From the comic book character to the 70s sitcom dad, funny people have taken on the German name Archie in more recent times but don’t be mistaken, there is nothing funny about this name that means “truly brave”. It is also seen in its Spanish variant as “Archibald”.

Hey, Arnold was a popular TV show and Schwarzenegger is the strong governor of California. The boy’s name Arnold is of English origin and means “strong as an eagle”.

Made famous by late-night talk courtesy of Arsenio Hall. Arsenio is a Spanish name that means “strength”.

Autrey is an English name that means “noble strength”. It’s the masculine form of the feminine Audra, Audrie, and Audriana.

Aziz, yes just like the funny man Aziz Ansari. The name Aziz is Arabic in origin and means “strong and beloved”. The name Aziz can be found throughout the Middle East, India, and Africa.

The name Barrett is of German origin and means “bear strength”. Barrett is seen more frequently as a surname these days.

Another name that is better known as a surname, like the Patriots star quarterback and the beloved Brady Bunch. The first name of Brady is Irish and means “broad spirited”.

Brian is a name of Irish origin and is popular in all English speaking countries. Its meaning is “strong, virtuous, honorable”.

Caden a battle-ready name that can mean strong spirit. Caden and its variants are Welsh and mean “spirit of battle”

Denzel is a boy’s name worn with a strong spirit by famed American actor Denzel Washington. The name Denzel is a name of Cornish origin which means “from the high stronghold”.

Donnelly is used both as a boy’s and a girl’s name and means “dark, brave one”. The name Donnelly has Irish roots.

Yes, like the Ghostbuster. Egon is of German origin and means “strong with a sword”.

Emeric is a boy’s name that is popular in France and the Cajun region of the United States. Its origins are French as well and mean “power”.

Eldrid is a Norse name that means “fiery spirit”.

Ethan is a dignified name of Hebrew origins that means “strong, firm”.

Evander is a strong name of Scottish origin, sported by boxing legend Evander Holyfield, and rightfully so. The name Evander means “strong man”, or “bow warrior”.

Fergus can be found in Celtic lore, representing courage. The name Fergus is of Scottish roots and means “man of force”.

Griffin is the first name of Latin origin and is used as a Celtic last name. It’s Griffith variant is Welsh. It’s meaning is “strong lord”.

Haldis is a name of Greek origin that means “stone spirit”.

Hamzah is of Arabic origin and means “powerful”

Hototo is a Hopi (Native American) name that means “warrior spirit who sings”.

Howard is a boy’s name of German origin, although it can be used interchangeably as a girl’s name too. The meaning of Howard is “brave heart” just like the movie.

Imre is a name from Hungary where it is still relatively popular. It’s meaning is “strength”.

The German name Hugh may be more associated with American playboys like Heffner and Grant, but the name means “bright in mind and spirit” or “heart, mind, and soul”.

Jabbar is one of the names used for Allah in Islam. Needless to say, its roots lie in Arabic origin and is also a popular boy’s name meaning “powerful” and “almighty”.

Kenzo certainly has a nice ring to it. This prosperous Japanese name means “strong and healthy”.

Kwan is a Korean name which means “strong”.

Mandla is an African boys name of Zulu origin that means “strength”.

Maynard is a name of German origin popularized by the Tool frontman. Its meaning is “hardy, brave, strong”.

Like Python or the greedy boss of Homer Simpson. The name Monte is of Norman origin and means “man power”.

Narve is a Dutch name that means “healthy, strong”.

Oswald is an English boy’s name that means “divine power”.

More popularly seen around town as “Ozzie”, as the first name of the Black Sabbath frontman. This name has Hebrew roots and means “strong, powerful, and courageous”.

Pacome is a French name that means “of strong nature”.

Paresh is a popular Indian name which means “supreme spirit”.

Quillon is an old Latin and Greek name which is still somewhat prevelant today which means “strength” and “crossing swords”.

Reggie, or Reginald, is an English name mostly used for boys but is seen in girls as well. Its meaning is “counsel power”.

Richmond is a name that could mean a strong spirit for boys. Its of German origin and means “powerful protector”.

Rock is powerfully masculine, see sported by strong dude “The Rock” as a nickname. But Rock is an actual first name too, made famous by Rock Hudson and derived from the Italian name Rocco.

Rostam is a strong spirit name found in the Turkish region and translates to “strong, tall, brave”.

Sosthenes is a name of Greek origin that is also Biblical. Its meaning is “safe strength”.

Just like it sounds, the name Stone denotes “strength” and is one of the top names to mean strong spirit.

Takeo is a Japanese boy’s name that represents a strong spirit. The name Takeo translates to “strong as bamboo”.

Tormey as an old Irish name which means “thunder spirit”

The strong name of Valdis is of Teutonic origins and translates to “spirited in war”.

Valentine is a boy’s name of Latin roots, meaning “health” and “strength”.

Warrick is of English origin and means “strong leader who defends”. 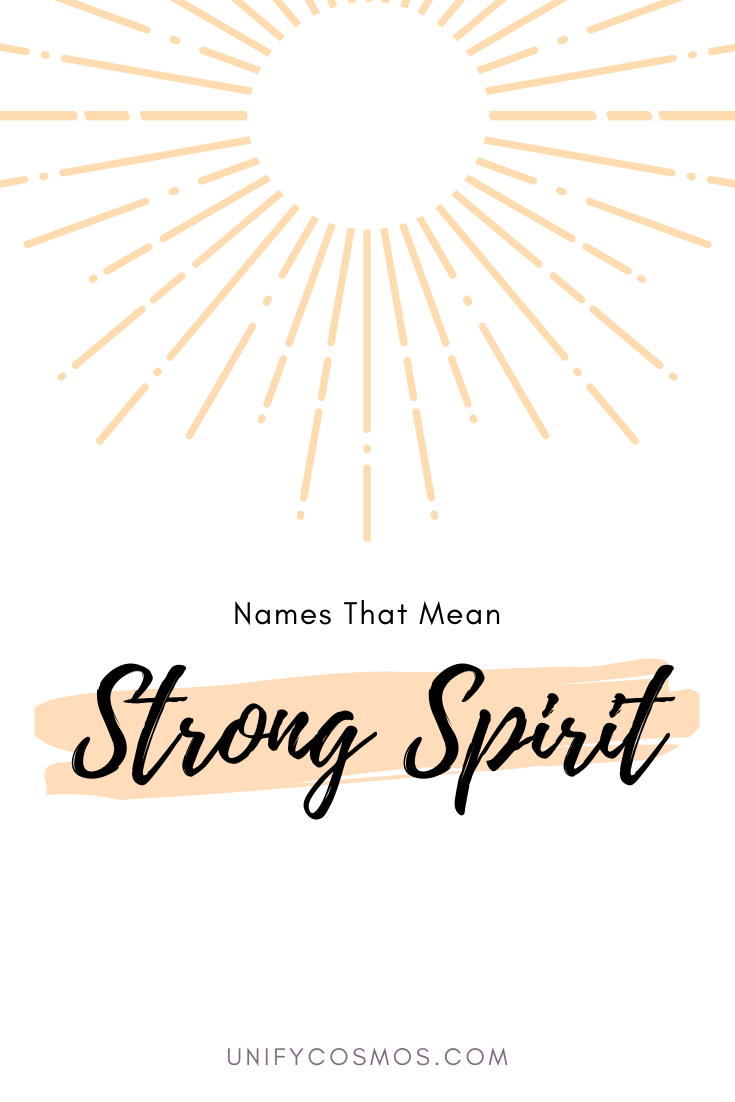 Below are girls’ names that mean “strong spirit”.

Adira has a pleasant ring to it. But should be noted that this Hebrew name means “strong”.

Aila is of unknown origin, possibly derived from several other names, and found across cultures. One of the meanings of Aila if “from the strong place”.

Alcie is a Greek name that means “strong willed”. While not as common today, Alcie’s variant names have become more popular, such as Elsie and Elsa.

Alma has Latin roots and is a popular Celtic name. Out of its many meanings, one is “independent spirit”.

Amdis is a name that means a strong spirit. The origin of Amdis is Norse and means “eagle spirit”.

Recognized as a Scandanavian name, Asta’s roots are actually of Greek origin and mean”divine strength”.

Audie and Audriana are English names while Audra is closer associated with Scottland. They all mean “noble strength” and are the feminine forms of the name Autrey.

Aziza is the feminine form of the name Aziz and is of Arabic and Hebrew origin. It means “powerful and beloved”.

Bali is an ancient Sanskrit name which means “strength”.

An Irish name which means “strength” or “exalted one”.

Briana is the feminine version of Brian, an Irish name which means “strong, virtuous, honorable”. Brianna is the name’s English variant.

Bridget is the Anglo-Saxon version of “Brighid” and means “strength”.

Britta is Scandanavian and one name that could mean a strong spirit. Britta has Sweedish origins and its meaning is “strength”.

Cyrene is a powerful girl’s name with ancient Greek origins. The name Cyrene means “supreme” power and she is an important figure in Greek mythology, the mystical nymph.

Elda is an Italian name that means “warrior”.

Enzie is a popular unisex Swahili name which means “powerful”.

Imara is a beautiful sounding name of Kiswahili origin and means simply “firm’.

Irie, the popular Jamaican saying for “positive and powerful” has also become a girl’s first name. Irie’s roots lie on the Carribean.

Keren is a Hebrew name which means “strength” and “power”.

Luana sounds graceful but also a fierce edge. Luana is one of the coolest names that mean strong spirit because of its German translation meaning “graceful battle maiden”.

Marcella is a beautiful Italian name which means “warlike” or “strong”.

Maude is a German girl’s name that means “battle-mighty”, giving this name the meaning of a strong spirit.

Mohagany is a beautiful type of wood but also a beautiful name of Spanish origin. Mohagany means “rich” and “strong”.

Nina is a multi-ethnic name that spans cultures – from Russia to Spain. In its Native American origin, the name Nina means “strong”. In Incan culture, Nina is a name that means “fiery goddess”.

Shakti is of Indian origin and popular in the Hindi culture. Shakti means “power”.

Solveig is a powerful girl’s name from Scandanavian roots and means “the strong house”.

Tetsu is a Japanese girl’s name that represents a strong spirit. The name Tetsu translates to “strong as iron”.

Trudy is a powerful girl’s name from German origin that means “universal strength”.

Valda is the name of Teutonic origins and the feminine variant of “Valdis”. This strong name translates to “spirited in war”.

Valentina is a girl’s name of Latin roots. Its the feminine form of Valentine, meaning “health” and “strength”.

Valerie is a French girl’s name that could mean strong in spirit. Its Spanish variation is Valencia and they come from Latin roots, meaning “strong” and “brave”.

There are Plenty of Names that Mean Strong Spirit

Whether you’re looking to choose a name that means strong spirit or if you already have one of your own, you’re in good company with this long list of strong, powerful names throughout history and across the globe that represent powerful people.

Click here to learn more about the spiritual meaning names.